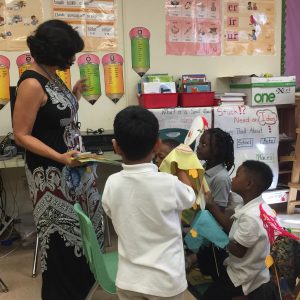 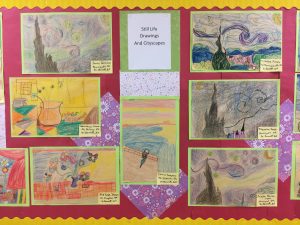 The goals established by USDOE Arts in Education Model Demonstration and Dissemination [AEMDD] grant were accomplished by the Rochester Arts Impact Study Enhancement (RAISE) MODEL. The goals of the grant are to: [1] integrate standards-based arts education into the core elementary and middle school curricula; [2] strengthen standards-based arts instruction in these grades; and [3] improve students’ academic performance, including their skills in creating, performing, and responding to the arts.

The Arts Director and Project Coordinator selected a teaching artist for each grade level, attended grade level meetings to query teachers about their ideas on what students could best learn using the arts in ELA—things students had difficulty learning. For example, the targeted skills and concepts for third graders were: 1) understanding character; 2) vocabulary acquisition, and 3) visualization.  Teaching artists were given an opportunity to respond to the skills and subsequently a small team comprised of all seven teaching artists and a few teachers developed integrated units/lesson plans during the summer of 2011.

[2] strengthen standards-based arts instruction in these grades; and

Arts Integration Sessions – The RCSD Arts Director and Project Coordinator design and facilitate professional development sessions for elementary teachers focusing on integrating arts learning into the curriculum. Treatment teachers were requested to attend 10, two-hour sessions (and receive P.D. credit from RCSD). Each session was focused on how to integrate a specific art form into another subject area at a specific grade level. It was delivered in a variety of formats to facilitate and encourage teacher participation. The facilitators modeled an arts activity and demonstrated how to connect it with ELA, math, social studies, etc. Teachers were provided with hands-on materials to aid in the replication of the demonstration in their classroom.

Job-Embedded: The RAISE Program leaders consider the informal opportunities treatment teachers have to observe and interact with teaching artists during the implementation of the integrated units as “job-embedded” professional development [D. Harloff].

[3] improve students’ academic performance, including their skills in creating, performing, and responding to the arts.

Creating, Performing and Responding to the Arts

In light of the fact that there are no standardized State assessments for the arts, the RAISE project leaders developed and piloted a rubric with New York State Arts Standards to assess student learning in three art forms represented in the residencies as well as other arts learning experiences, such as field trips to local performances.

The analysis above provides a snapshot of one year (2013) where the rubric was given to 1711 students in a variety of settings by raters who had minimal training. However, despite the inconsistencies, one year’s results did give us a baseline of student performance on using a New York State Arts Standards rubric in grades K-6.

In all ways of measuring student proficiency, either by art form or by arts standard, students on average were above 2.50, the cut-point for attaining proficiency in this four-point rubric. There are many limitations to this instrument, including the development process, the training of teachers, etc., but in its use, and its ability to improve teacher awareness of student proficiency on arts standards, it would seem this was a very helpful baseline starting place for teacher use of arts standards.