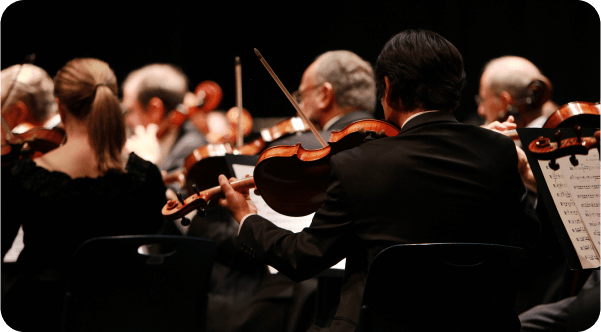 The Brooklyn Philharmonic and The SchoolWorks Lab, Inc. applied for and won a U.S. Department of Education’s Arts in Education Model Development and Dissemination Grant award for $330,000 in 2003. This grant supports the development, documentation, evaluation and dissemination of a standards-based Brooklyn Philharmonic music in education model called “School Residency Initiative” over three years. The quasi-experimental longitudinal study will employ pre-, mid- and post-test design with control and treatment groups and take 36 months to complete and is designed by Robert A. Southworth, Jr., Ed.D. of the SchoolWorks Lab, Inc.

The Brooklyn Philharmonic is partnering with Beginning With Children Charter School and PS 139 in a longitudinal study of two Brooklyn-based schools over three years where more than 90% of the children qualify for free or reduced lunch. Although 560 students will be studied as they move through the 4th and 5th grades, the Brooklyn Philharmonic’s music in education model called “School Residency Initiative” is implemented in four other schools so the total number of students receiving the School Residency Initiative will be approximately 1,760 students over three years.

The Brooklyn Philharmonic employs teaching artists who enact a ten-week music residency where students are treated as music composers. Each student draws contour lines of music and translates their creations into graphic notations. Teaching artists transpose student graphic notations onto standard music staffs which are then played aloud. The conceptually organized music curriculum is based on the orchestra’s selection of music for the current season. Four musicians from the orchestra are invited to the classroom twice during each ten-week residency. A school time concert or rehearsal is also provided for every student. The highlight of the residency is when the orchestra’s musicians play the invented notation scores of the students in an assembly for the school.

The Purpose of the Study

The purpose of this study is to examine how to strengthen standards-based music education, integrate music into other core elementary school curriculums, and improve academic performance as measured on traditional standardized tests in English Language Arts and Math, and traditional music aptitude profiles (Gordon 1975). Besides the quantitative analysis, a qualitative analysis will look at music curriculums and create new rubrics using National Assessment of Educational Progress (NAEP) protocols and New York City Arts Blueprint protocols for judging student performance in creating, performing and responding to the music.

The first year of study of the Brooklyn Philharmonic’s music in education model produced a partial picture and uneven quantitative scores due to a failure by one school to properly test its sample, and the failure of both schools to provide a schedule that honored the random-sampling design they had agreed to previously. The conclusion for that year noticed fluctuation in music scores, and some promising gains in ELA and Math scores.