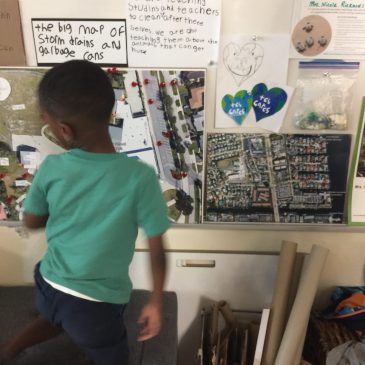 Student Learning in and Through The Arts

So I was visiting The Conservatory School in North Palm Beach when a kindergarten student, Connor, asked me if I wanted to see his trash project. I said of course and 25 minutes later he had happily lead me all around his classroom, while the class was going on, and explained every map, chart, statement and display of the trash problem that is outside of his school.

A Student Leads Me

Each time we stopped at the evidence of his learning, he spoke clearly, read everything correctly off the displays, and explained coherently how they had discovered a lot of trash, how they had formed a project to renew their outside grounds and remove the trash, how they had mapped it, found it in the storm drains, how drains empty into the Atlantic and how they had approached the Principal for her help.

Of course, by this point I am smiling and supporting him. This is what it means to educate a student well. When they can become the active creators of the organization of their knowledge. When they can explain a sequence of steps in their project based learning. When they can show how all of their creative use of the arts not only helps them, but also is a vital part of how they explain their academic work to others.

Of course the Principal is with us and so he stops his retelling me, so that he can update her, about the new plastic bright colored buckets that they will be delivering to all of the other classrooms. He then turns back to me to explain what he has already shared with the Principal, that the fourth graders were the most trash producing of all grades at this K-5 school. “Also,” he says to me, “Can I show you something else?” Well, sure, because I would rather be here with you for the rest of the school year, I think to myself. But I say to him, “Of course.”

This is What Schools Can Do

Later I will see the conservatory part of this public school, where bands and orchestras are hard at work, but for now, as I leave Connor and thank him, he says, “Check out the bulletin board outside my classroom!” When I look outside, I now recognize the use that Connor and his classmates made of the 114 pieces of trash they had picked up. The trash is all in grids and numbered lines, so that the Kindergarteners can display their arts integrated project-based evidence. The arts are integrated with math, english, social science and history. The students can collect it, count it, practice their tens placement, practice their letters to the principal, the fourth grade, etc. And this is what a kindergarten education looks like. This is what learning looks like. This is what a school can do for all of our kids.