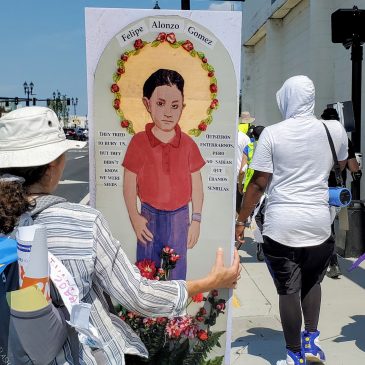 Back-to-school season is here. Students are refreshing backpacks with supplies and adjusting to new schedules. Yet, many immigrant students and their families are wondering if they should go to school at all.

Immigration politics are difficult to escape right now (Shear & Kanno-Youngs, 2019). Misinformation about, and abuse of immigration policies is having a devastating impact on children and schools (Delacroix & Dillard, 2018). I introduce myself to the SchoolWorks Lab EdSpeak community this week with reflections on a 76-mile pilgrimage that I recently made from Boston, Massachusetts to an Immigration and Customs Enforcement (ICE) detention center in Dover, New Hampshire with the Essex County Community Organization (ECCO) to “denounce the racist immigration system that dehumanizes Muslims, uses Black and Brown bodies for profit, cages children, and causes death” (ECCO, 2019).

Yes, I know that my introduction is already political. You are meeting an artist, a teacher, and a human who is able-bodied, White, and privileged enough to have a week to take a symbolic walk on behalf of people who I may not know personally. Yes, I know that my choice of political action uses difficult language including “racist”, “dehumanize”, “death”, “Black and Brown bodies”, and more terms that are often cleansed from educational work in order to appear as welcoming and inclusive as possible. Yes, I know that non-immigrant students are dealing with racism, dehumanization, and death because of their Black and Brown bodies, gender identities, or abilities and I continue to advocate for their rights as well. Yet, I also believe that polite language has not especially improved the potential for those students, so today I will tackle one impolite issue at a time.

I have been a teacher to undocumented students and children of undocumented and immigrant families for over thirty years. As an arts educator, my immigrant students created works that expressed a spectrum of experiences from maps of personal travel across borders and painstakingly detailed portraits of murdered loved ones to contemporary performances of absurdist immigration court proceedings. Students considered our classroom to be a safe haven, but those were the ones who came to school. Since 2016, there has been an increase in school absences due to fear of detainment or deportation (Acevedo, 2018). Children who are detained at the US-Mexico border with their families may face even greater perils. They are at increasing risk of death (Moore, 2019).

I walked in solidarity with refugees from Guatemala and El Salvador this week along with their children. Together, with interfaith and non-denominational leaders we carried portraits and mementos of children who were murdered in the United States by neglect and abuse due to harmful policies around detention of immigrants and asylum-seekers. The mementos were crafted by artists who, as US citizens, were unafraid to look away from the responsibility they held toward all children who deserve a better life. The ability of these simple creative objects to inspire people along the way to learn more about the issues was especially powerful.

As we prepare for another school year, I would like to offer resources to readers so that they can be better advocates for students whose lives are affected by issues of immigration.

The term Sí, Se Puede! has been used a rallying cry for many immigration protests since the 1970’s with Cesar Chavez and the United Farm Workers. I believe that Yes, We Can confront our own responsibility for all children right now.