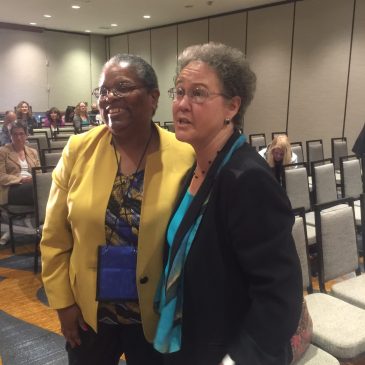 New York City welcomes the American Education Research Association back for its annual conference, “Dreams, Possibilities and Necessity of Public Education” Thousands of researchers from around the country are gathering to listen, review, feedback and pushback on the latest research thinking about the nation’s education system.

With the threat of privatization and non-equitable forms of schooling, the sessions reflect the struggle to define the importance of education in the current political era. Here is a sampling of the introduction to this year’s conference from the AERA website:

The Dreams, Possibilities, and Necessity of Public Education

Let America be the dream the dreamers dreamed—
Let it be that great strong land of love
Where never kings connive nor tyrants scheme
That any man be crushed by one above.

(It never was America to me.)

O, let my land be a land where Liberty
Is crowned with no false patriotic wreath,
But opportunity is real, and life is free,
Equality is in the air we breathe.

Alice laughed. “There’s no use trying,” she said: “one can’tbelieve impossible things.”

“I daresay you haven’t had much practice,” said the Queen. “When I was your age, I always did it for half-an-hour a day. Why, sometimes I’ve believed as many as six impossible things before breakfast.”

—Through the Looking-Glass, and What Alice Found There (1871), Lewis Carroll

The 2018 program theme calls us to confront the struggles for public education, considering the times in which we are living, the historical arcs that shape our present(s), and the roles we can play in the fight for justice. Public education has the potential to be a central pillar of democracy and to foster civil deliberation. It is essential to democratic government, which both depends on and makes possible respect for diversity, justice, and human dignity. It has a crucial role to play in our divided world, bringing communities together to build an inclusive formation of “we the people.”

Although public education’s possibilities inspire us, they are elusive. As researchers and practitioners, we have a special responsibility to make possible what often seems impossible about the dreams for public education. We must build knowledge to support the quest for equitable educational opportunity. We must (re)imagine and contribute to developing what public education can and must be for today’s children, their families, and communities, and for the billions who will be inheritors of this earth. Ours is a theme of criticism and debate, but also of celebration and hope, and above all, of understanding and action.

Disciplined and diverse scholarship is crucial for this agenda. We must generate and learn from a wide range of research, including empirical, philosophical, critical, and historical analyses. We must include a broad variety of voices, evidence, sources, and perspectives to inform our deliberations. And we must apply these diverse methods, methodologies, and epistemologies to a host of pressing questions: What is and should be the relationship between “publicness,” educational opportunity, place, and democracy? What and who constitutes the public, and how does that vary in education systems around the globe and diverse epistemologies within those systems? For whom, when, where, how, and why has public education been established? When and for whom has it succeeded, failed, or been reinvented? What explains the recurrent quest for common ground, from the inception of common schools in the 19th century to desegregation in the mid-20th century, to the Common Core in the 21st? And why has resistance to this quest been necessary in some cases and oppressive in others?

Introspection is also essential in the development of knowledge and evidence about public education; we must ask questions also about how education research can recognize the perspectives and knowledge of historically marginalized peoples. We must ask how we can advance the tools and methods of our fields to create new forms of rigor and discipline, new kinds of tools and evidence, and thus, ultimately new knowledge. We must learn from scholars who examine the histories of the struggles for and over public education from diverse standpoints. What have scholars learned from their own first-person experiences? How are the voices and efforts of those in communities and schools connected to the generation of knowledge? These questions invite us to hear wrenching truths, critical perspectives, and dissent. They also invite us to learn from triumphs and possibilities and to see and realize the seemingly impossible.

Our Annual Meeting will take place in New York City, a fitting site for our focus on public education. New York represents the composite nature of our society, with its histories of struggle to form a union of diverse peoples. Before Dutch, British, and French settlers arrived and appropriated it, Mannahatta was (as it continues to be) Lenni Lenape land. It is the gateway through which immigrants from many lands have entered the United States, some displaced and fleeing hatred and persecution, some seeking opportunity. In the 20th century, New York was a destination for the migration of Black people from the South and the landing for thousands from Latin America. It was home to the Harlem Renaissance and the Black Arts Movement. At City College of New York, open access higher education first thrived in the mid-19th century. Comprising islands, waterways, and estuaries, New York is one of the frontlines for the impacts of climate change and people’s fights against environmental racism. New York represents hope in new possibilities and renewals, as well as loss—of culture, land, nation, and names. New York is at once connection and separation, crowdedness and isolation, gentrification and neighborhoods, poverty and wealth. It is beautiful patchworks of culture and language, of experimentation and activism.

Struggles for public education are embedded in stories from around the globe. Respecting the particularities of cultures, times, and places, how can we learn sensitively from one another’s contemporary experiences and histories? How can we contribute to building the necessary wisdom, commitment, and capacity for meeting the challenges of public education? At the 2018 Annual Meeting, we will come together to share insights and analyses of efforts past and present, which make the impossibility of public education possible. We ask of the AERA community to hope radically, imagine creatively, and act inspirationally to build knowledge and take enlightened next steps for public education.

PrevPreviousCongressional Briefing on Performance Assessment: An Opportunity to Advance Educational Equity and Transform Teaching and Learning
NextThe Cost of Helping A Student In Poverty: Education and Arts IntegrationNext