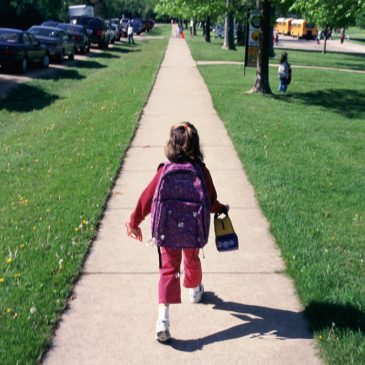 Equal Access to Education for Children Regardless of Status

A past student of the NYC public school system, and a close friend, has been very worried about Trump’s crack-down on illegal immigrants who go to NYC schools. The real issue is the “rights of children regardless of status” and the Trump administration actions to deport illegal immigrants. The fear that student rights will be not protected creates a hostile environment in schools:

House Democrats are asking the Trump administration to send a clear message reminding the nation’s public schools that, despite recent changes in federal immigration enforcement policy, they are still legally obligated to educate undocumented children.

The representatives expressed concern that the educational rights of undocumented students may be overlooked as the new administration cracks down on those in the country illegally. The Supreme Court ruled 25 years ago that U.S. public schools must serve all children, regardless of their immigration status.

“In this environment of trepidation, it is important that we do all we can to minimize the impact these policies have on school attendance and student learning,” the top Democrats on the judiciary, education and homeland security committees wrote in a letter Monday.

The lawmakers also sought public assurance that the administration intends to avoid enforcement actions at schools and other “sensitive locations,” as has been the federal government’s stated policy since 2011 (Washington Post, April 3, 2017).

Of course this reminder seems reasonable, but how much are kids in danger? CNN reports that the most recent immigration directives signed by Trump differ significantly with the previous administration’s definitions:

Trump’s order goes far beyond that, using a sweeping definition of “criminal” and giving a single immigration officer the ability to make judgments on threats to public safety.

The order says the priority will be removing deportable immigrants who “have been convicted of any criminal offense; have been charged with any criminal offense, where such charge has not been resolved; have committed acts that constitute a chargeable criminal offense; have engaged in fraud or willful misrepresentation in connection with any official matter or application before a governmental agency; have abused any program related to receipt of public benefits; are subject to a final order of removal, but who have not complied with their legal obligation to depart the United States; or in the judgment of an immigration officer, otherwise pose a risk to public safety or national security.”

From a practical point of view, the new immigration policies can be seen as threatening many more children’s parents than in the previous administration and creating that fear for the child in school who may or may not come home to parents. On the face of this is the removal of undocumented citizens who are harmful to our country. Under the surface of this order is a wider definition that could include many more removals and that gives power to one ICE officer to make the determination of danger or security risk. This really needs to be reviewed and our children need to be assured that their country is acting appropriately with their parents. Our schools need this clarity (CNN, Jan. 28, 2017). Please check out the fact sheet printed below about the decision:

In June 1982, the Supreme Court issued Plyler v. Doe, a landmark decision holding that states cannot constitutionally deny students a free public education on account of their immigration status. By a 5-4 vote, the Court found that any resources which might be saved from excluding undocumented children from public schools were far outweighed by the harms imposed on society at large from denying them an education.

For more than thirty years, Plyler has ensured equal access to education for children regardless of status, but anti-immigrant sentiment continues to threaten that right. States and localities have passed measures and adopted unofficial policies that violate the spirit—if not the letter—of the Court’s decision. For example, in 2011 the state of Alabama enacted a law requiring school administrators to determine the immigration status of newly enrolling students, which in turn resulted in markedly higher rates of absenteeism for Latino school children and caused much fear and confusion in schools. Supporters of the Alabama law wanted to challenge Plyler itself, claiming the Court implied that its ruling could change if sufficient evidence established that the enrollment of undocumented children harmed the overall quality of education, but that challenge was blocked by the Courts.

This fact sheet provides an overview of the Supreme Court’s decision in Plyler and subsequent efforts by states and localities to avoid compliance with the decision (Supreme Court Immigration Decision, 1982).